I kind of owe you all a update on the Land of Amy, a proper one, not just lots of stuff about exorcisms.

I’ve been super busy the last eight weeks getting together structural edits on the upcoming release called Wylt. It’s my about as close to a romance you guys will ever get from me and its book one of a new series. I’m not going to say too much about it just yet but I can tell that it involves the following:

Also, I am completely in love with it. I know it’s kind of narcissistic to admit it but I am. I finished its sequel Blaise in July. For those who have read The Firebird Fairytales yes, THAT Blaise.  I’ve always been a classic gothic genre junkie so I’m really excited that I’m finally going to release something…especially mashed up with a bit of Welsh myth. It’s in cover design at the moment so really can’t wait to see how it turns out.

In other news, I’m winding down one semester of uni (publishing – don’t get me started how disappointed I am in it) and winding up for another (The Dead Sea Scrolls – dying of excitement) so I am a bit hit and miss.

I am doing NaNoWriMo officially this year for the first time. I’m okay on a writing challenge but November is always an odd, busy month for me so I’m plugging away on the new WIP. It’s about an exorcist that lives in Melbourne and is like an unofficial prequel to a Mychal book (yeah that Mychal). This is why you are seeing all the random exorcist articles on the blog. I’m re-blogging so I can mostly find them again and keep track on various chunks of research. So far it’s a rather random book. I am moving between really liking it and being really worried about it. More so than I think any other book I’ve written. I’m about 35k words in. We’ll see how it turns out by the end of the month.

What else? I’ve been watching some amazing TV at the moment, but the ones that have been really rocking my story teller boat are:

I’m worried about America. It’s like a dependable sibling has gone bat shit fucking cuckoo banana pants and humming in a faintly cult vibe of sheer madness. Patrick Rothfuss has a good blanket fort solution. I highly recommend that.

I’ll let you know when I have release dates on Wylt. You’ll get some teaser snippets and other treats, I am going to try and get a promotions only newsletter up and running soon too.

I’m trying to finish off a bunch of work at the moment so I’m not around on social media or the blog much. I have about 100 pages left of my final edit of Rise of the Firebird (book three of The Firebird Fairytales). It’s epic – like 150k words epic- so it’s taking me a lot longer to get the way I want it. It’s the final book where everything needs to tie up and make sense (oh the spoilers I could tell you) so the editing process has been a lot more timely and intense.

I’m also studying two units of Uni this semester instead of one so I’m on the hop to get assignments completed and in.

Oh yeah and I’ve had an epiphany half way though writing the current WIP BLAISE so I’m having to go through and structurally rearrange things.

In summary, I’m busy but I’m still thinking of you.

Here is stag to make you feel better. 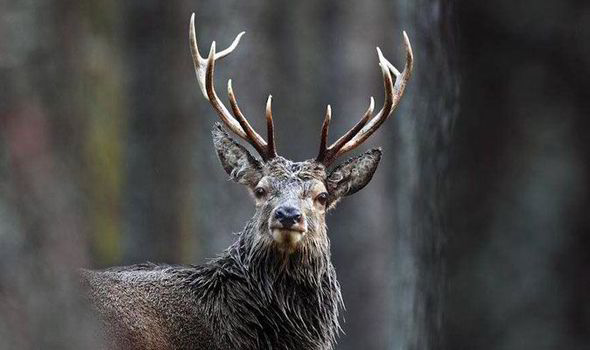 Ohh what a magnificent beast.

And a beautiful fairytale picture to let you know where my head is at right now.