As some of you know, I’m currently on a small social media hiatus  BUT  I am stopping in quickly to let you know that my beloved Magicians are being featured on fellow author Victor Acquista’s podcast ‘Podfobler Productions’! It was so fun (and kind of spooky) to hear an audio narration of ‘The Immortal City’ and have my own words spoken back to me.It’s made me really hope that I get to hear it as an audio book one day. You can check the episode out anywhere where you get your podcasts, but also on Facebook, YouTube and Spotify (I’ll share this link in my Instagram stories).

Like Magicians of Venice, Victor’s newest thriller novel ‘Serpent Rising’ deals with some of the theories around Atlantis, but ones that I didn’t touch on (namely what I call the Egypt Connection -Thoth, the Emerald Tablets and Atlantean descendants). That means more Atlantis goodness for everyone! You know I’m weak for anything Atlantis, so it’s going to be an insta- buy for me when its released on 6th of August.Heres a description (also, how GREAT is that cover!) 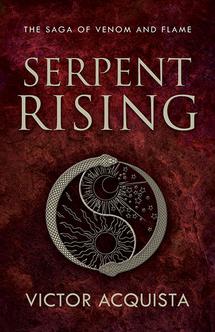 Ever since her great aunt left her alone in a cave when she was ten, Serena Mendez has been haunted by the traumatic incident. Now she’s an unemployed, pill-popping twenty-one year old suffering from nightmares and PTSD. When her psychiatrist suggests she visit her great aunt to get to the root cause of her ailment, she reluctantly agrees it’s time to confront the past.
Accompanied by her geeky friend Bryson, they travel to a Navajo Reservation to meet with her great aunt and return to the cave where it all began. But what she discovers points to an ancient conflict between the Illuminati and a Luminarian sect with origins to Atlantis—and she appears to be at the center of it all. With more questions than answers and only a handful of clues, Serena embarks on a mystical journey across six continents to learn more.
But sinister forces oppose her. Pursued by a powerful enemy, Serena must evade capture and fulfill her true destiny. Can she expose dark secrets and a hidden conspiracy? Or will those who wish to remain in the shadows find her first?
You can pre-order and learn more information about it here.

I am hoping to get you a full June update to you soon that’s going to be chock full of news too, so keep an eye on your inbox.

In the meantime, as the world feels like its going completely mad, please listen and be kind to each other and to yourself,