A quick heads up that both The Firebird Fairytales Boxset and The Western Wars Boxset will be Free on Amazon this weekend so its a perfect time to check them out and leave a review! They are also on Kindle Unlimited if you are a part of the program…Check out descriptions below x 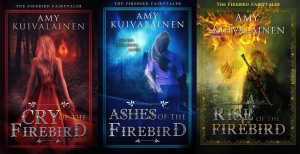 Cry of the Firebird
Born on the crossroads between worlds Anya’s Gate Keeper magic is buried under grief and rage until one fateful night a firebird hatches on her farm who is sharing its body with the fabled Prince Yvan. With Yvan’s dark magician brother Vasilli and other powerful enemies closing in around them, Anya has no choice but to sober up, follow Yvan into Skazki and hope that she can learn how to control her awakening magic before it destroys her and any hope of keeping the gates to both world’s safe.

Ashes of the Firebird
Branded as Rogues and hunted by the supernatural world Anya and her companions flee to Budapest, a place of new allies where they will be safe. They begin the search for Yanka, Anya’s ancestor and the only person in history with enough power to change the tide of the brewing war. Her relationship with the Thanatos Trajan is made complicated when he accidently feeds off her and trouble finds them when Aleksandra saves mysterious demon hunter Mychal from an attack, bringing new monsters and threats to Anya’s door.

Rise of the Firebird
Travelling from the battlefields of Skazki to the Underworld of Tuonela, Anya and her companions encounter the vicious dark goddess Louhi and gain two magician’s, the mad hero Kullervo and Eldon Blaise – apprentice of Merlin himself. As devastating secrets of history and the heart are revealed, Anya must fight the darkness within her and rise up to be a symbol for the Neutral rebel army that rallies under the banner of the firebird. Ready to restore the balance at any price, the final battle of the three armies will shape the worlds forever.

The Western Wars is an epic fantasy series with loads of adventure, magic and romance

‘Come to me and I’ll whisper secrets that will shake the worlds. ‘

When a spy from the mysterious Eastlands is caught in his kingdom, Haldirian is sent to the only reliable scholar of the East left on the continent of Elindor. With her help, he’s determined to stop the fear of war spreading, but as the first female heir in history, highly intelligent and carrying a warrior swagger Aláenor isn’t what Haldirian has learned to expect from royal princesses. But Aláenor isn’t as confident as she appears as she’s haunted by the memory of her dead mother and plagued by a man whispering in her nightmares.

The spy claims that Mordecai, dark magician and Emperor of the East sent him to scout their kingdoms for an invasion, but it’s the threat of unknown magic that forces them to act. The West turned their back on magic hundreds of years ago, and they will have no way to stand against it if the mysterious Emperor decides to make war.

Together, Aláenor and Haldirian will journey to the other side of the world to learn the truth, but nothing is as it seems, and the East will reveal secrets to Aláenor that will shatter her world, question her loyalties, and forge her into the queen she must become.

Still recovering from her imprisonment in the Red Fortress, Aláenor travels to the northern city of Anan in search of new allies in her war against the Emperor Mordecai.

Anan has more than one surprise for Aláenor, and as she comes to terms with the magic awakening inside of her she will need Haldirian’s support to make it back to the West.

Aláenor has been raised to believe that Mordecai’s family line were traitors, but history is written by the winners and she will discover she has more in common with the enemy than she thinks.