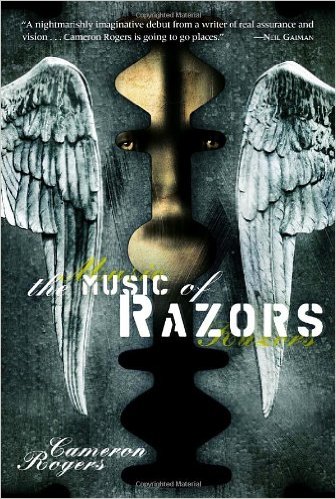 In nineteenth-century Boston, a young doctor on the run from the law falls in with a British confidence artist. Together, and with dire consequence, they bring back to the light something meant to be forgotten.

A world away in London, an absent father, haunted by the voice of a banished angel, presents his daughter with an impossible friend…a clockwork ballerina.

For two centuries, a bullet-removal specialist has wielded instruments of angel bone in service to a forgotten power . . . and now he vows to find someone else to shoulder the burden, someone with a conscience of their own, a strong mind, and a broken will. For a hundred years he has searched for the perfect contender, and now he has found two: a brother and a sister. Walter and Hope. Either will do.

Last night something stepped from little Walter’s closet and he never woke up. Now he travels the dark road between worlds, no longer entirely boy nor wholly beast, but with one goal in mind: to prevent his sister from suffering the same fate as he. Only the creature he has become can save Hope. But is it too late to save himself?

Disclaimer: I’ve written this blog four times and failed to capture my thoughts so if the following seems bouncy it’s because..well..fuck..I don’t think the book has finished processing in my head, or it keeps changing in my head, and when I go back to reference something the words are different.

Some books are made for things. They are made of sunlit beaches, lazy Sundays, train ride, cafes and dinners by yourself. Some are meant for rain, to be shared in book clubs, giggled about over wine with your girlfriends or clutched tight in times of grief.

The Music of Razors is made for midnight and storms and low lit fireplaces. For knives in alleys and whiskey in dirty glasses.

It is not recommended for writers going through a moment of doubt about their craft as it’s a gamble as to whether it will snap you out of it and make you work a lot harder, or it will make you think seriously about maybe doing that accounting degree that your Dad always wanted.

I’ve seen it described as Gaimanesque.

Reviewers and critics love to throw the term ‘Gaimanesque’ around; like it’s somehow become an umbrella genre for anything that’s strange, incredibly well written and that leaves you feeling fucking unsettled. It is a term that limits both Neil and the other writer it’s referring to in my opinion. It’s the box builders in this world trying to make something different fit.

It would be more accurate to call it ‘uniqueness’ and The Music of Razors is nothing short of unique. Don’t be fooled by it’s size or innocent appearance. The writing is tight.

“There are two things to remember in this life: That the worst crimes are committed in the name of love, and that everyone makes mistakes.”

Here there be terrors my friends but something I found the most unsettling was the sheer failure of people, monsters and the Devine alike. God creates an angel that allocates power and leaves it with this burden, Lucifer won’t have him because it’s his fault for putting rebellion into his malakhim DNA. Henry is disappointed by his father as well as Dorian. Millicent is disappointed in Dorian as a neglectful father. Walter and Hope’s parents themselves are turned into monsters through tragedy. Suni’s mother is cold and ambivalent. Walter  and Suni fail Hope in multiple ways.  The book is not afraid to be a Jenga Tower of fucked up failures that all inevitably crash down around everyone.

It’s also about change in everyday shape and form.

‘People change. The interesting ones, at least. You start life as one thing, and become something else. Upgrade or downgrade, it’s all change – it’s all vital-and besides…up and down is all relative to the angle at which your head’s been twisted.’

It’s hard to talk about it without wanting to dissect and as I said…I’m pretty sure I’m still trying to figure it all out in my head. The writer in me wants to get my tweezers and scalpel out and start cutting ( ‘Oh ho! I see what you did there Cam…wait..what? where the fuck did that extra appendage come from?’ ) but the cleverer writer part of me knows that it’s not the best way to go about it. Like my other great find of the year Library at Mount Char  it’s going to take a couple of months of thinking about it and mulling over drinks and another re-read to capture all the tricks and find pleasure in all the little parts I may have over looked in a first read.

Cameron recently released the novelisation of the game Quantum Break (that he also helped write) and it’s on my list to read regardless of the fact I’ve never played the game because his writing is so damn good. I’m sure his games are fucking magnificent but after reading Music an irrational part of me thinks he needs to be writing more books. Shoot, I could do with a whole book just from the opening chapter of Music.

I heard him on a panel talk about villains…when I walked out of there I was pretty convinced he was one. After taking the time to hang out in his head my opinion on this matter hasn’t changed. He’s the kind of villain that is also a really nice guy at the same time so yeah..watch out for that. Really, keep an eye on him and follow what he does closely. Buy the books and learn everything you can to arm yourself. He’s like a fucked up Pied Piper and The Music of Razors is a song that get’s stuck in you head that you can’t stop listening to.

Seriously, stop reading this blog, do yourself a favour and buy the fucking book ok? Get it here, here and here.