“I am driven by my longing,

And my understanding urges

That I should commence my singing;

And begin my recitation.

I will sing the people’s legends,

And the ballads of the nation.”

So begins “The Kalevala”, the heroic epic of Finland. In the 1830’s Elias Lönnrot was a doctor and like the Brothers Grimm he began to collect and record the folk stories and songs he encountered in his time travelling through remote Finland and Russian-Karelia. In 1849 he published “The Kalevala”, the culminating result of all of his research. Like Beowulf, the Illiad and The Edda’s it is rich in folklore, mythology, epic battles and powerful magic.

My third book in the ‘Firebird Fairytales’ series is the most Finnish of the three but you definitely get a taste in the others. When Anya is working word magic I tried to keep the rhythm and stanza’s a similar shape as those used in “The Kalevala”, for all magic is wrought by the power of words. I fear some of it is lost in translation with the English version, the version I use, from the original Finnish but one day like Tolkien I will have to teach myself Finn in order to understand the epic stories better. Recently on a trip to Finland I strolled through the streets of Helsinki and I freaked out with excitement every time I saw something Kalevala related, such as this statue of Väinämöinen outside the old Helsinki University house. When I saw the roof of the National Gallery I almost burst into tears. 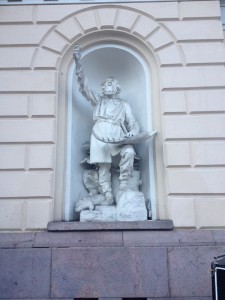 These stories resonate on a primal level with readers and lovers of  myth. These are old stories and they are unique to the landscape and people that they are based on. After Finland regained its independence from Russia in 1917 there was a massive cultural revolution, a focus on what it meant to be Finnish. “The Kalevala” was an intrinsic component in Finland regaining its cultural heritage. Sibelius wrote operas and symphonies inspired by it, Akseli Gallen-Kallela painted works of incredible beauty just to name a few artists that had it as a focus of their works.

The inspiration flows on today with writers drawing on it and not just Finnish writers either. I discovered Väinämöinen written in “Hammered” by Kevin Hearne and after doing a few fan girl squeals I messaged him on Facebook about it…and then squealed a bit more when he replied back. I thought long and hard about writing Väinämöinen in as a character but he decided he wanted to appear in another story of mine separate from the “Firebird Fairytales.” Other characters will appear however, Tuoni for example is the Lord of Tuonela, the Finnish Underworld and is the one that gives Anya the firebird egg. He stays around, with plans of his own, and others will start to come out of the wood works. It is my aim, in my small way, to contribute to this heritage of story telling and hopefully open it up to readers that never knew it existed.