To celebrate my first blog and the release of my first novel “Cry of the Firebird” I thought it might be appropriate to talk about inspirations over the next few posts. “Cry” is the first book of my Firebird Fairytales Trilogy and like many of my story ideas it was started by a random series of thoughts that spiralled out of control.

In 2008 I was on a plane coming back from training in Townsville for a management role in retail that I had just accepted. I had bought a copy of Neil Gaiman’s “Smoke and Mirrors” from the airport book shop in an effort to cheer myself up and set about devouring it on the flight. “Chivalry” is a story in the collection about a woman who finds the Holy Grail in an Oxfam Shop and has Galaad arrive on her doorstep, offering her rare and wonderful treasures in exchange for the chalice. One of the gifts he produces is a phoenix egg. I loved the story (and I highly recommend this collection to anyone in need of a magic injection) but the phoenix egg stuck in my mind leaving only one lingering question…what would happen if it hatched? Would it burn the house down? Would people come looking for it?

I can cheerfully admit that I have been obsessed with fairytales all my life so I knew many concerning firebirds. “The Golden Bird” by the Brothers Grimm is perhaps the most well known but is draws from an older Russian tale about Prince Yvan. The latter is the one I ended up choosing during my ravenous search for all things firebird. 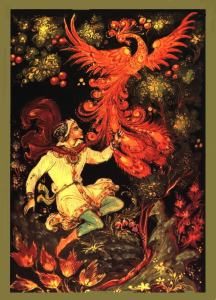 Originally I thought I would write a short story about a girl who is given a firebirds egg that hatches, but as soon as the Lord of the Underworld made the delivery it spiralled into a novel, which then blew out to three. I had always wanted to write a story that had characters from Russian mythology in it; Baba Yaga, her chicken legged cottage and fierce Riders had been clacking about in my head for many years. Being Finnish I had found the Kalevala in my early teens, a collection of folk takes much loved by Tolkien, and I was fascinated how the magic was portrayed in it. Väinämöinen, the Great Shamanic Hero used the power of words to construct his spells. He has a great knowledge of the origin of things and his rune singing commands the power of nature and people. I really wanted my protagonist Anya to be able to wield this kind of magic, with some variations, to touch on her (and my own) Finnish roots.

Over the next few weeks I am going to share some of the fairytales I’ve drawn on with you all. It’s my hope that I will introduce you to tales that you have never heard of before and point you in the direction so you can discover this amazing and relatively untapped source of magic.