Look at this magnificence! I’m so in love with it! I have adored all the covers done for this series but this is definitely my favorite. I can’t wait until you all get a chance to read this book.

The concluding chapter of The Magicians of Venice is a treasure hunt through time, drawing on figures of magic and history as Penelope hunts for a lost relic capable of defeating the demon Thevetat and his followers.

The search for the legendary seal ring of Solomon has begun, and Penelope must sift through its long and convoluted history, from lost emperors to crusaders, court magicians, Renaissance alchemists and popes, if she has any hope of finding it.

As Penelope’s magic continues to grow with the magical high tide, she and Alexis will rely on each other more than ever to keep those they care about safe from the ongoing assault by the priests of Thevetat.

With the tide of magic finally at its peak, the final battle against Thevetat will begin and no one will be the same once it is over. 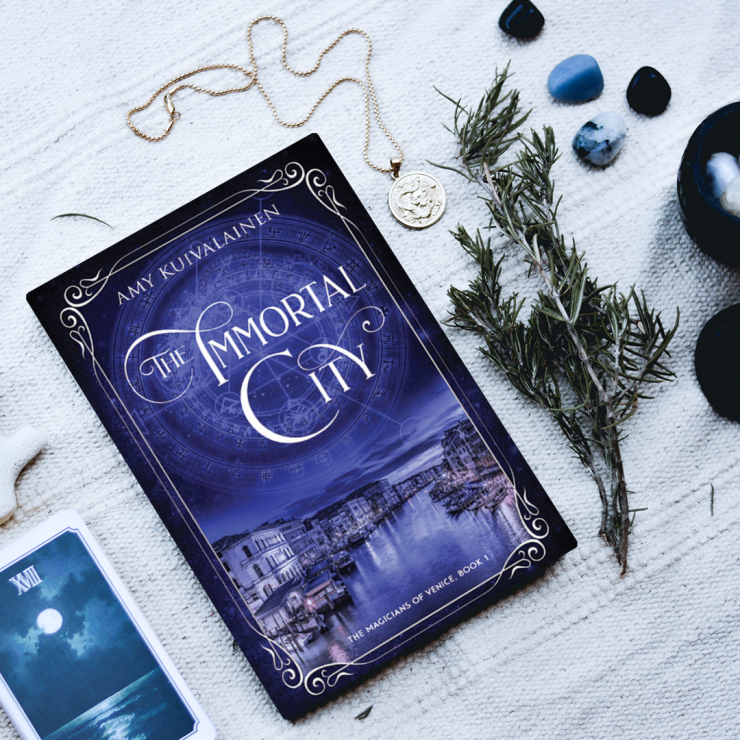 It’s been a while, but damn, have I been busy. 2021 has really taken off with a running start and I’m so excited for all the books I plan on putting out this year.

If you are on Instagram, you would’ve seen that this week I’ve started going through all of my structural edits for ‘King of Swords’ and it’s accompanying short story ‘The Lion and the Star.’ I am OBSESSED with this new Tarot Kings world, and I’m really looking forward to sharing it with everyone as soon as I can. In the next few weeks I’m going to start doing some cover reveals with some descriptions for both of these. I’m going to tease on Instagram but do the actual reveal here first, so keep your eyes your inbox!

In the next little bit, I’m going to start doing the cover reveals for ‘The King’s Seal’ too! I’ll also have some dates for the ARCS. I’ve seen the cover for it and it’s my FAVORITE out of all the books, and that’s huge because I’ve loved all the covers.’The King’s Seal’ is also my fave book in the series and I’m so pumped that it’s finally going to get out in the world.As above, the actual reveals are going to be done here on the blog first.

I have been editing like a mad woman so I haven’t had a chance to do a lot of reading but my Greek gods, history and myth obsession is continuing. I’m researching for a future book at the moment involving those things so I’m fixating hard. I have managed to read the below that are Greek Gods at their messed up finest.

The first one is LORE by Alexandra Bracken. I didn’t know what to expect when I picked up this one. I’m really effin hesitant when it comes to YA or NA books, but this really blew me away. Even though the protagonists are about 19, how they act and the story itself felt more adult with no whiney characters or love triangles. The premise is that Zeus has punished the gods with a game called the Agon, which turns them mortal for one week, and at the mercy of being hunted by the bloodlines of Greek Heroes. It was a wild read and a lot of fun. The research in it was amazing, and you know I’m weak for books that really blend history and myth in a modern setting. You can check out the full description here, and I highly recommend.

The second Greek gods book I’m fan girling hard over is ‘Wings of Fury’ by Emily R King. This one is based in an Ancient Greece, in the time before Zeus over threw Cronus. The main character, Althea is determined to protect her sisters and bring down the tyranny of the Titans. The world building is amazing, and has female characters that are bad ass. It’s so refreshing to see the Golden Age from a woman’s perspective and with a woman’s voice. I can’t wait for book 2 that will be out in October (fuck yes to rapid release). You can check this book out here.

Finally, because I’m obsessed with it, I’m recommending ‘The Blood of Zeus’ on Netflix. If you’re someone who is currently pulling a face because it’s animated, STOP THAT. It’s insanely good anime. It’s visually gorgeous and the storytelling is excellent. Like, good enough for me not to hate Zeus…and I fkn HATE Zeus in general. I will warn you though, the violence is graphic and Apollo is so hot it should be illegal.

Okay, that’s all from me because I have to get back into editing, but expect another post with a cover reveal later in the month.