Hey Everyone! I’m back!

If you saw my social media posts (fyi I tend to only hang about Instagram these days) you would’ve seen I went on a much needed social media hiatus and went full Hermit mode. The constant bad news stream was messing with my word count and anxiety too much so I had a big break to get my head back on straight. While away I had a big ‘Atlantis’ binge. You would think I would’ve had enough after writing 300 k words of ‘The Magicians of Venice’ series, but no, Atlantis is still one of my fave kinks. Also, because I was writing so much of my own interpretations of Atlantis I kind of forced myself to steer clear of any other Atlantis media as much as possible. So here is a round up of my fave Atlantis stuff from the binge-fest. 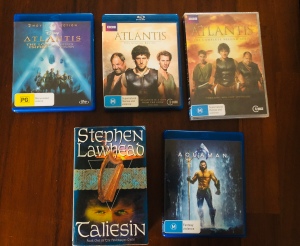 Okay so it’s no secret that I love Disney’s ‘Atlantis’ movie…so much so I went to buy it on Blu Ray only to discover THERE IS A SECOND MOVIE. I was shook that I had no idea of it’s existence! And its so freaking good. It has relics, sass, a freaking Kraken, Odin and lost cities. I loved it and watched these back to back more than once. And will again because Milo is just so nerd hot and its got everything I love.

I finally started watching BBC’s ATLANTIS, which is a really cool take on famous Greek myths like Herakles, the Minotaur, Medusa etc. I am almost finished season 1 and have season 2 lined up because its so much fun, the same way MERLIN was so hilarious and full of really good looking dudes. I love Greek myth retellings so highly recommend.

I watched ‘Aquaman’ again and still really enjoyed it despite the ‘Atlantis still being under the ocean’ trope isn’t my fave in the Atlantis tropes. I love the DC universe and Jason Momoa is just perfection and brought something extra to the character of Arthur. I’m not fussed on Amber Heard but its still a fun movie and love the idea of lost Atlanteans colonies in other parts of the world.

Moving into books, my absolute fan Atlantean myth retelling is without a doubt, Stephen Lawhead’s Taliesin. It’s book one of his Pendragon Cycle (my fave Arthurian myth books) and the first half is about Charis, a princess of Atlantis, it’s destruction and her being a refugee to Britain. Stephen Lawhead is next level with his Celtic Historical fiction and his take on Atlantis will always be my favourite. I got onto this series when I was 14 and very angry at the world and it pretty much inspired me to stop fucking about and get serious about writing fantasy. I could literally talk about this series forever so I’m going to stop here, but you’ll never regret picking up a Lawhead book.

I’m a sucker for indie romance and I love Domino Taylor (loved ‘Daughter of Fortune Series’), so when Amazon threw ‘Return to Atlantis’ at me I had to give it a shot. It follows the ‘Underwater Kingdom of Atlantis’ trope but also tied in alot of cool fantasy stuff like mermaids and shark riding and underwater battles. It has romance streak in it but it isn’t dominant, it really follows the main female character Kai and her journey so its more a fantasy with romance as opposed to romance fantasy. There is another book out so mind the cliff if you decide to pick it up. You can check it out here.

The next book on my to read list has been on it FOREVER is ‘Atlantis’ by David Gibbins. For obvious reasons, I’ve held off on reading a book about an archaeologist who is looking for remnants of Atlantis. Now that I have a draft of ‘The King’s Seal’ that I’m really happy with, I finally feel comfortable giving this one a go. I’ve been a bit reluctant too because of the male archaeologist/ historian/adventurer and ladies man trope isn’t my favorite (apart from Indie because INDIE PUNCHES NAZIS) … I’m willing to give it a go though because I haven’t read David Gibbins, and maybe I’m in for a pleasant surprise and not a cringe fest on how the main character describes and treats smart women in the story.

So that’s my Atlantis media round up.

In other news I am busy trying to get my head in gear and write something that’s not ‘The Magicians of Venice’ but I haven’t settled on a project as yet. I have a lot of fun ideas and a few that scare the shit out of me, which is pretty usual for me. Also, I know that I’ll start receiving final edits and galley proofs of ‘The Sea of the Dead’ book 2 of ‘The Magicians of Venice’ that I’ll need 110% brain power for. I can’t WAIT to share this book with you. It was such a next level book for me in all areas of research, plotting, character development etc. It tried to kill me and I love it because of it. I really love Atlantis and magic and Venice, and I’m so proud of how the series has come together. I’m still getting people messaging me about how much they enjoyed ‘The Immortal City’ and this sparks endless fucking joy for me because I know how much it ramps up from there. You can read more about ‘The Immortal City’ here, and if you are reading it and enjoying please leave a review, as they help other readers find my books.