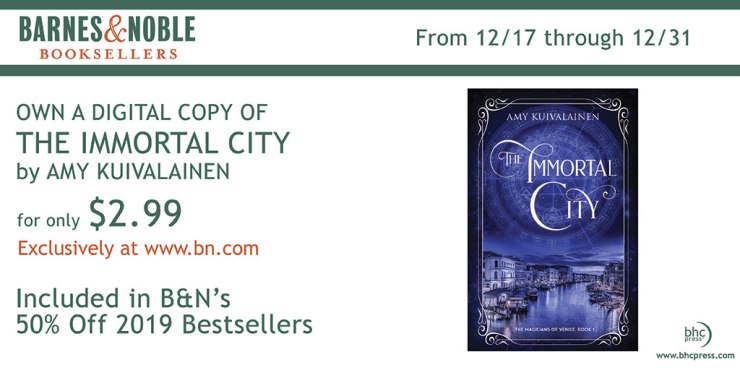 ‘The Immortal City’ is currently in Barnes and Nobles 50% off Bestseller Sale from today until the 31st of December so the Nook version is only $2.99! Bargain! Also, if you are after a paperback or hardback you can get them 15% off at BHC’s online store.

(Note: if you are a hardcore Kindle junkie don’t forget Amazon will price match if you request it 😉) 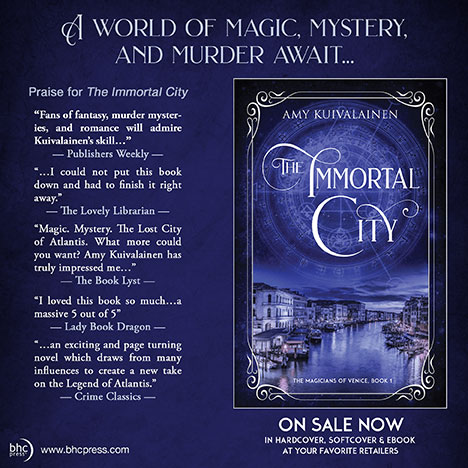 In the heart of Venice, a woman is sacrificed to a forgotten god, sparking a mystery lost for thousands of years…

Dr. Penelope Bryne is ridiculed by the academic community for her quest to find the remnants of Atlantis, but when an ancient and mysterious script is found at a murder site, she flies to Venice determined to help the police before the killer strikes again.

Penelope has spent her entire life trying to ignore the unexplainable and magical history of Atlantis, but when she meets the enigmatic Alexis Donato, everything she believes will be challenged. Little does she know, Alexis has spent the last three years doing his best to sabotage Penelope’s career so doesn’t learn the truth—Atlantis had seven magicians who survived, and who he has a duty to protect.
As Alexis draws her into the darkly, seductive world of magic and history, Penelope will have to use her heart as well as her head if she is to find the answers she seeks.

With the new MOSE system due to come online, and Carnivale exploding around them, Penelope and Alexis will have to work together to stop the killer and prevent dark magic from pulling Venice into the sea.

I can’t believe it’s December already…honestly, it’s been kind of freaking me out. If you’re on my social media you would’ve seen I’ve been in Venice recently and also the reasons why I haven’t done a blog in while are as follows:

Since September 1st, I have:

That’s….a lot. I’m not having a brag, I’ve been having a burn out, and the blog is always the first thing to drop off when shit gets hectic. I didn’t expect the end of my year to be this crazy but the writers life/ publishing in general can be nuts at the best of times. Expect announcements and all sorts of good stuff coming in the New Year.

The other good news is…Venice was amazing and I feel so blessed to have had a chance to go back. I spent a lot of time walking and writing and editing the first draft of ‘The King’s Seal.’ I can say this with all honesty, it is the best book I’ve ever written. Maybe because I’ve gone through and edited my whole back catalogue recently (and I wrote ‘Cry of the Firebird’ ten years ago – yikes), but I have had an opportunity to look how much I’ve grown as a writer and see my style change and evolve. I’m always going to strive to be a better writer, but I’m so happy with how ‘The King’s Seal’ has turned out. It was also the most research heavy book I’ve ever written so it was a challenging beast that tried to kill me more than once, but I love the hell out of it. 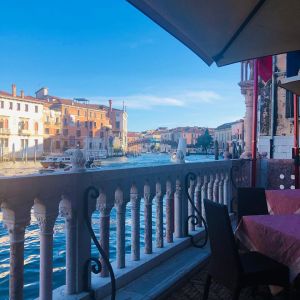 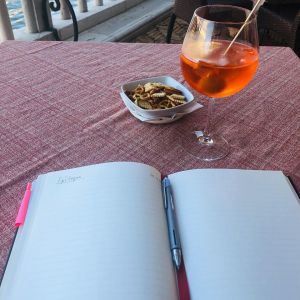 I wrote the Prologue for it when I was in Venice last year, and I wrote the Epilogue there this year… It was a ridiculously beautiful day so I sat outside the lovely Palazzo Stern, there was Spritz and ALL the tears because I’m soppy and romantic like that. Penelope and Alexis have been such a huge part of my life in the past few years, and while I never say never when it comes to closing off a world, for now their story has ended. I’ve got the worst writer hang over, and I’m weirdly emotional but as I said, really proud of how it all pulled together. While I don’t have an actual date yet for book two, ‘Sea of the Dead,’ I know it will be sometime Autumn next year. I’m so excited for you all to read it! Okay..time for some beautiful Venice pics (I found the Banksy! And a library that I’d like to just live in all the time) 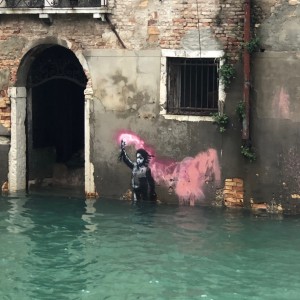 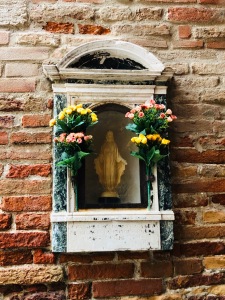 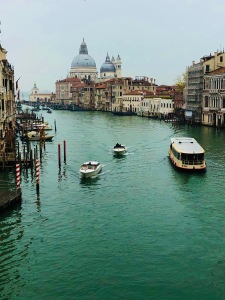 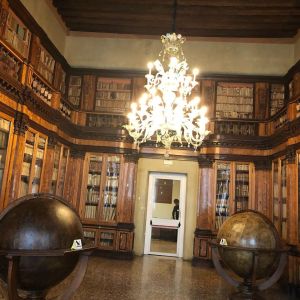 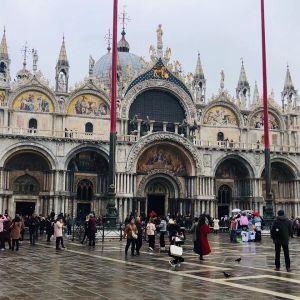 So what else has been happening? I’ve read some great books recently…

On my holidays I read ‘The Starless Sea’ by Erin Morgenstern. I’ve been a huge fan of Erin’s for ages so this was one was my most anticipated reads of 2019. 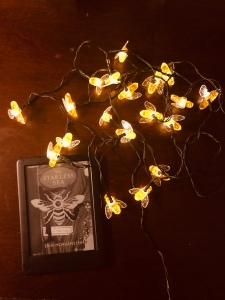 It’s a tricksy, winding, beautiful fairy tale that I immediately started a re-read of because like many of my fave books (looking at you, ‘Jonathan Strange and Mr Norrell’) the second reading is all joy as you pick up on all the clues. I loved it..it made me buy solar power bee lights for my office because I’m like that. 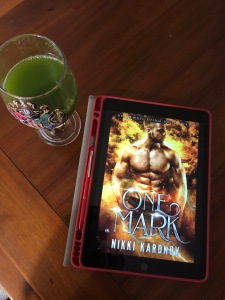 The other series that has been super good for my tired writer brain is Nikki Kardnov’s ‘Blackwell Djinn’ series. I’m super obsessed and I love the world building and the new take on the djinn. I could fan girl the shit out of this series for ages but go and check them out here!

My current read is ‘Call Down the Hawk’ by the amazing Maggie Steifvater and its making me have ALL of the feels. She’s one of my fave writers especially the way she writes magic just makes me ache in my heart. 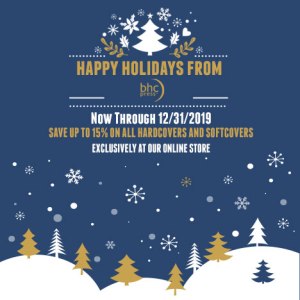 Before I go, ‘The Immortal City’ paper back and hardback are on an awesome 15 % off Holiday promo between now through to the 31st of December at the BHC online store! It would make an awesome stocking stuffer and will be an excellent escapism read for when your family is driving you insane 😛  Check it out here!

That’s all for me for now, I hope you have an awesome and safe holiday!